A considerable number of researchers and fans of pirate lore tend to associate Captain William Kidd as without doubt, one of the worst pirates in history. William's mark on the pirate world is one too often presumed as fueled by illogical decision, yet there are a handful of researchers who believe Kidd's reign to instead be calculated and cunning. Some of those unsavory decisions placed Kidd in an unsettling position and he spent the latter part of his privateer career attempting to restore England's faith in his actions. William however did not fall short in catching targets off-guard, or in presenting alliances with unexpected and sometimes unorthodox methods for obtaining bounty. This paints a very different picture of Captain Kidd, instead as a master savvy sailor who's secrets attribute to success beyond common measures of privateering wit.

During the 1690's, Captain William worked for authorities, commissioned by governing politic in New York, and Massachusetts, to apprehend and deter pirates tormenting merchant vessels crossing the Indian Ocean. These delicate operations were exceptionally risky, yet the discerning privateer swiftly brought about justice all the while bordering lines of maritime law. Kidd knew the rules intimately and adhered to code in a prudish effort often met with scrutiny by authorities. Treading on a toxic line between privateer and pirate is sure to test any man's allegiance over time, and the edgy captain would soon find this out first hand. William's swift actions against piracy placed him among ranks of sailors also willing to balance on that fine line with maritime law. Maintaining a good standing offered protection with reward, and for Kidd this was plenty of incentive to keep to code. However, one questionable event would alter England's perception of the edgy privateer, indicating his allegiance seemed to be faltering.

The event, though rather amusing in hindsight, gave the crown further reason to scrutinize. William and his crew intentionally failed to salute the Royal Navy as custom dictates upon passing vessels. Instead of a typical salute of respect for the crown, the rowdy bunch of would-be pirates dropped their drawers and mooned the Royal Navy as they floated by. This didn't sit too kindly with subjected officers, and news of the defiant incident soon reached England. On top of making a bold statement to the crown, this news also gained audience with a few unruly pirate fellows, including Captain, Robert Culliford, the pirate who once commandeered one of Kidd's ships. Further eyewitness reports investigating Kidd outlined problematic abuse and blatant torturing of prisoners. These reports were also intercepted by pirate captains on their way to English command.

When England received word of William's latest fiascoes, the Royal Navy identified with a preemptive label of pirate since the actions did not officially warrant trial. It appeared now, in the eyes of the Navy, that Kidd's loyal ambitions to England were breaking. Kidd is now viewed by the law as corrupt over his associations with pirates, and perhaps, rum-drunken with power bestowed to uphold English law. For the time-being, Kidd and his crew continued privateer missions commissioned by the crown. England, with reason to distrust, paid much closer attention to the escalating situation, still with no hard evidence capable of bringing Kidd to trial.

William found himself a way off the plank after a suspicious attack on a Mughal convoy; which is now identified as Kidd's first act of piracy. He somehow reasoned as extenuating circumstances significant enough for England not to pursue. Then, as it would seem, a final tipping point pushed the borderline privateer to full-fledged pirate once and for all, presenting England with fair right to have Kidd stand trial. A short time after a questionable Mughal attack, Kidd confronted an Armenian ship sailing under French colors, named the Quedagh Merchant. The vessel appeared to be fair game for privateer commendation, but then William later discovered during capture that the ship's captain was an Englishman granted privilege to sail under French protection. 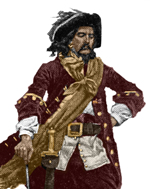 At this moment Kidd attempted reasoning with his crew to let the French ship free, and to leave its sailors unharmed. The cargo holds full of gold, silver, and prized silks enticed the unsavory men, and the crew decided there will be no such accord. When the pirates refused to give up the loot, Captain Kidd decides to side with them. William is now officially on record with England as a pirate. After scuffling over the Quedagh Merchant's loot, Kidd's rowdy pirate crew commandeered and renamed it, the Adventure Prize. Years following the capture take their toll on Kidd and it becomes apparent the action was a haunting one. William fought his urge to restore good standing with England, but it continued to grow much stronger.

Kidd proclaimed his innocence to the crown, stating the Quedagh Merchant and previous incidents were entirely fortuitous, but England no longer trusted him. The privateer now turned remorseful pirate struggled to continue, laden with guilt instead of treasure, and success of operations began to dwindle. The crew grew irritated at the lack of prosperity and received little or no payment for their efforts. Finally, during a pirate hunt off the coast of Madagascar met William face to face with facts of an unsatisfied crew waiting for an opportune moment. While surveying ship activity, Kidd spotted none other than pirate captain Culliford, the man who made away with one of the ex-privateer's ships earlier.

William planned an attack on the unsuspecting pirate captain Culliford. The enervated crew cast doubt on Kidd's motive with belief the ambush to be revengeful rather than a serious reward. Disgruntled at the captain's plans, Kidd's crew instead became mutinous and abandoned him on the spot to join the likes of Culliford. Together with Culliford's men, the mutineers proceeded to remove everything of value from the Adventure Prize, and then turned their sights to a second ship called the Adventure Galley. They stripped all remains of treasure and metals, right down to door hinges and irons with a burning desire to leave William with nothing. After valuables were secured, and the Adventure Galley left in ruin, Culliford and Kidd's former crew sealed its fate. Kidd pleaded in a traditional pirate bargain for a share of loot before being left stranded. Robert and his men agreed to the accord. Also fortunate for Kidd, thirteen of his men did not mutiny and elected to continue on with him. Next stop, New York.

As a wanted pirate for actions against Quedagh Merchant, William could not simply sail directly to New York without crossing paths with the Royal Navy. Countering this, he set sail towards the Caribbean in a final effort for freedom. To escape England's prosecution, Kidd first sought to evade it. Knowing the former French ship, Adventure Prize, would easily be detected by the Navy, he stashed it in a lagoon on Isla Catalina and gave the remaining thirteen men permission to barter off cargo should lucrative deals persuasively present themselves. After making arrangements for the Adventure Prize, Kidd offered a portion of saved treasure for a sloop named St. Antonio, and with this he could sail under cover.

William made off to New York, believing the accusations of piracy would be pardoned and seen as purely accidental. According to records, Captain Kidd thought additional leverage may be necessary and may have stashed treasure along the way to be used for bargaining should the need arise. Finally, upon arrival, Captain Kidd did not have a chance to plea for pardon. He was arrested on the spot and thrown into the brig, the plan backfired. Kidd's years of loyal service to the crown did not absolve his actions, even if truly fortuitous by the claims. It appeared this was the end of the line for the remorseful captain. Then, in 1701, England made an example of Kidd, sealing his fate. The crown's actions were a loud, eerie warning to all pirates, as William hanged on the shoreline in an elevated iron cage until death. After which, he remained on public display for three years.

Given the nature in how he died, it is uncertain to this day whether or not Kidd's leverage came into play during imprisonment, or at any time before the hanging irons. Stories about his treasure became legends mixed with details of a controversial privateering and pirate lifestyle. In 2007, true to legend, the Adventure Prize is found off the southeastern coast of Catalina Island, presumably untouched by wreck looters since its sinking. According to documentation, the thirteen men left to barter became impatient awaiting Captain Kidd's return in 1699 and pillaged the ship before sending it to the sandy sea floor set ablaze. Quedagh Merchant was discovered by Indiana University's diving science team before it could be scavenged by modern treasure bandits. The team found twenty-six cannons, three functional anchors, and metal objects indicative of a scrap iron heap believed to have been left in the hold; all matching historical record.

Gold, silver, gems, or any valuable treasures associated with the captain were not discovered, further corroborating details of the ship's final moments. Adventure Prize now resides where divers first discovered it, protected for future generations to enjoy on recreational dives. Furthermore, legends speak of a treasure map left behind that designates where William buried his bartering cache along the way to New York. The described map does exist, though it is yet to be proven authentic. Shreds of evidence suggest a distinct possibility it might be genuine, which has inspired modern treasure seekers to continue the hunt.

However, there an oddly strange component on Kidd's treasure map; The location points at the Cape Verde islands off Africa's western coast. It's reasonable to consider William would pursue great lengths to protect his leverage, but is it possible he sailed the small St. Antonio sloop to Africa and back before heading to New York? Perhaps the sloop wasn't involved at all when the map was created, suggesting that William hid his cache near Cape Verde while on the way to the Caribbean from Madagascar. Stories told regarding the Culliford confrontation do not mention a side trip to Cape Verde, or intentions of Kidd to stash some of the treasure. If this were the case, then the thirteen men who chose to continue sailing with William undoubtedly knew about it, and they probably attempted to return to the location after sinking the Adventure Prize.