Pristine, relaxing tropical getaways band across the Equator between Tropic of Capricorn and Cancer like a beam of sunlight fusing two halves of Earth together. Favorable weather, warm temperatures, beautiful scenery, and white sand beaches are just a few reasons people really enjoy spending vacation time in these areas. Lush landscapes, heavenly horizons, and surreal sunsets aren't the only treasures Earth's tropics have to offer though. Much more is hidden from plain view, nestled beneath an ocean crest among seas of coral and exotic marine life, lost to time for hundreds and even thousands of years. For as long as people have visited and lived in tropical areas the ocean finds ways to reclaim precious treasures once safely tucked in the pockets of man.

Trading operations have long depended on fair tides for transporting goods. Sailing vessels made port in places previously unfathomable to reach by land, playing crucial roles in expanding empires gaining new territory while helping to move resources around the planet. Livelihood of entire nations and their citizens depended on prosperity of shipping fleets hundreds of years ago just as in the modern world, with a lucrative promise to readily obtain more resources and sustain large populations. Ocean trading routes connecting distant civilizations brought many benefits by expanding horizons, increasing knowledge, and advancing technologies. For this increased convenience however, there is a price.

The sea is a beast in its own right, with promises of new found wealth from distant lands, secretly stowing misery, misfortune, and servitude to false hope. Facing the oceans meant not only overcoming severe weather such as typhoons, hurricanes, and endless miles of unpredictable waters, but it also entail dealing with a threat of unexpected guests prepared at arms to take the ship, its goods, and dispatch the crew as quick as the blink of a pirate's eye. Weather and atmospheric conditions continuously play important roles crossing open waters by ship. Frightening patterns develop, such as rogue waves, williwaws, and microbursts threatening both severe damage or vessel capsizing in a moment's notice. When conditions are just right, a pleasant sail becomes a life-threatening event, not to mention water looks the same in every direction! Long days aboard a rocking ship passing in and out of stormy seas are sure to get the best of any mariner.

As history points out repeatedly, a number of vessels succumbed to the deep blue's calling, meeting an end in free fall to the ocean floor. Then, at the bottom of the sea, they face the ocean's ultimate grasp, trapped over time in sediment and bits of coral, creating new homes to future generations of marine life. Unfavorable weather plays a predominant role in the tales of many ships lost at sea, working synonymously with the deep blue calling. The added dynamic further complicates navigation by masking reefs, rocky outcrops, and sand banks in swishing swirling ocean swells, and subjecting ships to stormy situations too dangerous for even the most weathered of captains. Perhaps legends of the Kraken are in part metaphorical descriptions of threatening weather on the ocean, to grasp the largest of ships and snap it in two, eating the ship and crew. 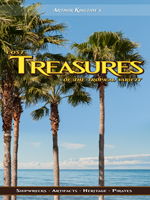 Shipwrecks serve but another purpose should a bold adventurous band of modern explorers toil long hours with their lives at risk to find, dive upon, and recover artifacts lost to ancient ocean perils. At times those dangerous situations lead to new discoveries which may prove old legends and their treasures to finally be true. Considering the sheer number of myths and legends, only a fraction of lost artifacts have been successfully recovered, and many still lurk deep in dark shimmering waters for later discovery. Each cache reclaimed from below unforgiving seas further demonstrates a possibility to recover the treasure of a lifetime, gracefully fueling motivations of new-age treasure hunters without hesitation. To whom we ask, could this fever be attributed to?

Lockwood pioneered early underwater film equipment and helped push sport scuba into the mainstream with several of his inventions. Marx is now credited for numerous underwater archaeological discoveries previously a faint blip on global radar. A new world opened up when Marx located Manila and Spanish galleons, uncovered ancient Mayan temple sites, and spearheaded underwater dive explorations of nearly forgotten Mayan Cenotes. The ability to find ancient cities and artifacts buried deep beneath the cresting seas pioneered a new frontier for scientific discovery, one which would prove to be as bountiful as the ocean itself to some decree. Restoration of lost human cultures, every artifact a piece of a puzzle truly valued beyond any monetary sum for the priceless heritage it returned.

Renown undersea explorers Lee Spence and Mel Fisher built upon the work of Marx and Lockwood however, shocking the world with rare sunken relics of historic significance that are extremely valuable treasures by material composition. Fisher and Spence were so successful at sea adventuring they managed to rediscover lost galleons worth over four-hundred million at the dawn of sea exploration, burrowing their way into the imaginations of people world-wide. News headlines of this magnitude inspired many people to become overnight treasure hunters clambering at an opportunity to discover fortune for themselves. Gold fever spreads to the masses quickly, especially with staggering monetary value at stake.

Precious metals, jewelry, gemstones, and other rarities were an integral part of old-world trading, abundant in their cache concentrations. In modern times, commodities are prized for their materialistic value, rarity, and importantly, the history behind each piece. The use of rare elements to define value of commodities may stay around for centuries to come, as mankind's fascination with gold and jewels stems back to the days precious metals were first discovered. Rare treasures are desired for their captivating beauty, their relationship to wealth, and for the tantalizing tales sometimes attributed to the piece, as the last known surviving memorabilia of predominant historical figures or events. Finding these treasures is to restore lost or forgotten antique craftsmanship once coveted by kings and queens as motivational currencies fueling vast kingdoms and empires throughout the ages.

As with any scientific discipline, advancement of technology allows researchers and underwater adventurers to reclaim history in ways previously unimaginable, though recovering ancient sunken treasures is an arduous task even with modern world innovations. Imagine the effort involved many hundreds of years ago! Salvage operations then were carried out without scuba equipment, without GPS mapping devices or sonar, and a lack of many comfort amenities found on ships today. Crews faced great risks by depending on free diver recovery efforts amongst sharks to hook cargo for manual hoisting aboard a rescue vessel. As technology improved, explorers faced dangers of diving bells and consequently often used slaves to retrieve items given the bell's high mortality rate.

Underwater recovery was slow, arduous, and at times inhumane. Over time, inventions and innovations effectively changed the process, presenting far less danger to achieve the same objective. Brawn, blood, and sweat turned to ingenious solutions with technology. Beyond dangerously intensive manual labor driving technological innovations, treasure reclaimers faced privateers and pirates who were just as eager to partake in treasure hunting. Pirates notoriously picked off salvage operations as easy, identifiable prey. To a pirate, sailing into a recovery operation eliminated some of the guesswork, knowing something valuable must reside below if salvage crews were risking their necks diving for it. As much as reclamation teams attempted to disguise the fact, or find ways to distract scavengers, the inevitable pirate onslaught would drive them away if not successful in a timely manor. Unfortunately in modern times, like in the old-world, pirates still exist by running covert operations. They dive on protected wreck sites and look for ways around maritime treasure laws to facilitate their own greed. A bounty of irreplaceable heritage is lost to black markets routinely when this happens, and along with it we lose an intimate knowledge of our ancestors that may not otherwise be told.