To some degree, the idea of a ghost ship is imagined in a literal sense. Much like a mysterious, spectral vessel slowly peering from misty fog as it glides closer, and closer into viewing distance. Once the deck becomes decipherable, you notice nobody aboard, captaining itself above the dark abyss. To this, one may even imagine a translucent crew, skeleton swabbies with curved blades and pirate hats. This aside, we now ask, what exactly is a ghost ship? To deep sea treasure hunters and wreck divers, ghost ships present unfortunate dead ends and money pits. A figment of legend without historical account and a long cryptic trail to follow. It seems as though ghost ships have existed simultaneously with the real deal since the dawn of salvage operations, possibly even before.

One theory, which is accepted among some researchers, is that of deception in a variety of forms. In modern times, certain vessels classed as ghost ships may be the result of promoters attempting to gain attraction from tourism in areas of mention. Likewise, during pirate days, mentioning the location of a promising wreck while having a few at the pub is possibly one way to misdirect competition into looking elsewhere, far away from your own intended search area. Add salting to the plan and the distraction may work for a longer period of time while building some credibility among pirates and pillagers. Similar to intentionally marking lagan falsely for later reclamation, the concept of salting is borrowed from dubious gem mining operations; whereby prospectors were sometimes deceived of prosperity by crafty fellow who plant gemstones on a plot in order to sell the supposed claim or rights. It's not too unreasonable to expect the same sort of practice to take place among sea treasure hunters. Throwing a modestly filled chest overboard, may be enough to keep a salvage operation focused on that area for some time. 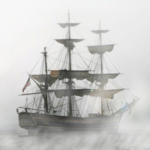 Ghost Ship in the Fog

Aside from the possibility of ghost wrecks as the result of devious treasure hunter shenanigans, there are some points which suggest a level of legitimacy may exist under certain accounts. One of these concepts considers a possible existence of ships repaired or built from miscellaneous wreckage parts at which point the resulting vessel becomes nearly unrecognizable. At the time pirates ran rampant in the Caribbean, everything and anything useful that could be salvaged from sunken boats found new uses. For the matter of survival, this included at minimum to be the ship's cache, supplies, swords, manifests, rope, sails, and possibly unspoiled food. It is common to find pirate wrecks which show significant signs of modifications, bolstered with added cannons, and outfitted for tactical missions. An unrecognizable vessel may then become a figment of historical record with ties to legend and myth of a lost crew.

Another concept examines the idea of ghost ships from a different perspective altogether. Given the value of wealth transported between the continents, extreme measures were necessary to ensure successful delivery of goods. To keep those transports below medieval pirate radar, there exists a possibility of completely private, undocumented fleets kept secretive by design under order of the crown. In times during civil conflict and attacks on royal thrones, deceptive tactics may have been employed to protect assets coming into the country. Along with this, there is a distinct possibility ship records may have been lost, stolen, or burned during disputes and the transitioning of power over kingdom rule. We understand a great deal of knowledge was lost in this manor throughout the ages, and with a significant amount of wealth at stake, this concept does remain plausible; with those undocumented and secret transport ships eventually becoming part of a lost history.

Ghost ships are also sometimes referred to as vessels that leave port never to be seen again, leaving little trace in their wake with hardly any evidence to discover where they might have disappeared to. Theories attempting to explain vanished ships involve those commonly attributed to wreck disasters such as bad weather, captain error, a marine heist, or damage to the boat that causes it to take on water. Sometimes the disappearance is so bizarre that rumors spread with the notion of other-worldly phenomena to blame. Without clues to follow it becomes anyone's guess as to what exactly happened during those last few moments, leaving nothing more than a perplexing mystery for future underwater explorers to attempt explaining.