In the early 1500's, Portugal attempted to make contact with the prosperous trading port Sultanate of Malacca at the height of Malay power. Malacca was the Malay capital, a bustling port trading Indian cloth, Chinese porcelain, silk, and spices amassing great wealth in the process. The Portuguese conquered Goa in 1510 as part of strategic presence in India although it was not initially part of the occupation plan. Those orders targeted Hormuz, Aden and Malacca, but it was from the unauthorized capture of Goa where the Malacca invasion staged. Curiously along on the trip to Malacca, the world famous explorer, Ferdinand Magellan. 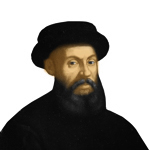 Initially the Portuguese did not commence battle on arrival and instead attempted negotiating prisoner release and permission to build fortifications. The assault began quickly after the negotiations failed to produce satisfactory results. Malacca was defeated with Sultan Mahmud Shah fleeing before the invasion could reach him. With port siege, the Mar filled its hull with an estimated eighty tons of riches, including two-hundred coffers of precious stones, diamonds, gold, silver, copper and tin coins. Also inside the cargo hold were many richly crafted items created for the King and Queen of Malacca.

Afonso de Alboquerque directed a small fleet from Malacca under the command of António de Abreu toward the East in search of the Spice Islands; possibly with Magellan aboard. Afonso and Flor de la Mar set sail toward Goa with the spoils. The weather turned for worse, churning a devastating typhoon in the middle of the night. High winds and waves combined, forcing the captain toward a coastal area. At this point the vessel ran into a beach, splitting the ship in two, dumping the seized fortune along with expertly crafted priceless Chinese lion statues into shallow churning, sandy waters. Much of the crew were lost and the wrecked Alboquerque watched as the waves finished his vessel off.

Last known whereabouts of the four-hundred ton carrack place it sunk near the end of 1511, somewhere in the Malacca Strait. A departure date is not recorded, which would help greatly to determine a final resting area. There are plenty of locations at the northern end of the Malacca Strait where the Flor de la Mar could have run aground. Depending on when Afonso left, and the ship's speed, it is possible the tragedy involved the Nicobar Islands while swinging West to Goa. According to one historical account, some of the Flor de la Mar's fortune flotsam was recovered, but the largest portion of the treasure is still unaccounted for. The theory claims local natives may have salvaged the riches, but this is really only speculation according to other researchers on the subject. In commentaries of Afonso de Alboquerque, it is stated the only plunder saved was a ruby ring, a golden sword, and a crown. The wreck itself is still awaiting discovery over five-hundred years later. Shifting sediments, tides, and currents have likely played an important role in masking the ship's discovery throughout the ages.