After the great American gold rush took California by storm in 1848, only a short amount of time managed to pass before the frenzy hit once again. This time, however, much further north in areas with far less favorable weather conditions. The Klondike managed to reawaken gold fever, attracting around a hundred-thousand prospectors, of which thirty to forty percent completed the long journey into Alaska; and of those who made it, ten percent found gold.

Those determined to confront harsh conditions in return for the wealth of their dreams followed treacherous land passes through the mountains or paid inflated rates for a ride aboard boats heading up the coast. A variety of ships put into service capitalized on voyages to the Klondike, and then again on the route back. Conservative estimates value around one billion in gold, on modern markets, traveled out of the Yukon by the passenger ships alone. Three main waterways lead to Dawson City, including a route inland along the Pelly River, the Skagway route just off British Columbia's coast, and the Pacific Ocean meeting with a northern branch of the Yukon River. It was along the Skagway where one prestigious ship, the SS Islander, met with an unfortunate disaster during a 1901 return trip. 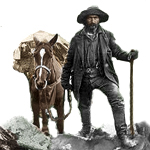 According to an article published in the Detroit Free Press, and confirmed by a letter from Canadian Customs Officer E.S. Busby, the Islander hit an iceberg near Douglas and Admiralty Islands. Approximately twenty minutes after the incident, SS Islander started a descent toward the river bottom, carrying with it the lives of around sixty to eighty passengers. SS Islander is closely associated with many stories of the Klondike gold rush as it brought many to and from a new land of promise reliably, and in modest luxury, up until this point. After the unfortunate event, stories flourished speculating over how much gold went down with the ship. The Detroit Free Press article notes a sum of two-hundred and seventy-five thousand, while the Canadian Customs Officers mentions a packet of gold dust lost along with cargo, ballast, and stores.

At the time, gold was worth around nineteen dollars per ounce, meaning a bit over fourteen-thousand ounces (nine-hundred and one pounds) were reported on-board at the time. On today's market that equates to a little over seventeen million, however, this estimate does not include a reduction percentage based on impurities eventually to be removed later during refining. Accounts from some of the survivors suggest between three to six million in dollar value of gold placed on the Islander prior to departure went down with the ship. This larger estimate equates to roughly twenty four million in current market based on inflation, and may be an accurate assessment if considering the potential amount of unregistered gold aboard.

Multiple attempts to salvage the lost Klondike gold have met with little or no reward for the effort. Even a well-thought operation which dragged the ship to shore at Admiralty Island revealed only a small amount of treasure; along with the fact more of the bow was missing than previously imagined. Further correspondence from Canadian Customs revealed the SS Islander's gold was kept in the bow area which broke off completely during the sinking. An expedition team has located the missing section, and yet, no gold has been recovered from this area of the wreck for the better part of almost twelve decades. Now, this certainly raises an eyebrow and effectively establishes a much deeper mystery with one question. Did the Klondike gold really sink with the SS Islander?