Traditionally, pirate loot maps pointing to buried treasure feature an iconic letter X marking the spot, indicating to those reading the map, dig at the point where two lines meet. From the icon, a dashed line leads a path around obstacles directly to the burial site. Simple maps drawn in this fashion worked for many years, but then as treasure stashing became a well known practice, maps took on more cryptic approaches to help keep it hidden until such time the looter could return. Over time, maps to burial sites were decorated with symbols and jumbled words to help hide the true location, requiring intimate knowledge of the treasure to find it. This practice also inspired lore of the maps themselves, with stories and legends told time and time again describing the location to buried treasure by aid of a map. In some situations, the maps themselves became almost as valued as the loot itself, as though the directions could guarantee treasure.

Yet, maps using cryptic symbols and word phrases to hide a true meaning, eventually proved to be less desirable in a sense by only inspiring an obsession to solve the riddle. Of course there is incentive to solve the problem, but it is the degree of complexity that eventually becomes the most deterring factor. For example, the strange non-traditional Lue Treasure map, which appears to be a collection of Masonic symbols arranged in a way that possibly indicates some sort of direction. The Lue map is a more modern rendition of an ancient treasure map, and to some researchers, it appears to be incomplete. Beyond this, it is an intriguing story behind it which makes this a little more difficult to decipher, to find fourteen tons of gold were buried somewhere in the United States. To entertain this idea, is supporting evidence available?

Between the first and second world wars, United States economy faced its toughest moments in history. In 1929, the stock market collapsed, adding to an already troubled state steadily escalating from this point. The Great Depression ensued, and many countries around the world faced significant financial hardship over the next two decades. Foreign war campaigns attempted to devalue the US economy while it spiraled during the depression. To help combat this, Franklin Roosevelt signed a document, entitled the Gold Reserve Act in 1934, to prohibit private possession of gold. Some researchers believe this is where the Lue treasure map stems from, that the Gold Reserve Act is a direct response to German war efforts attempting to inflate, devalue, and destabilize the US economy by introducing large amounts of gold into the financial system. 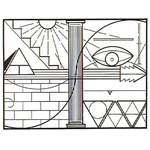 German war efforts increased substantially in power to the point of war in 1939, and this only furthered attempts to artificially inflate world economies. In 1942, the Germans established an initiative known as Operation Bernhard running out of multiple concentration camps. The goal of this operation, to print enough counterfeit British bank notes to destabilize its economy. By 1945, Operation Bernhard had produced over one-hundred and thirty-million pounds, but the British learned of the forged currency early enough to take preventative measures comparing bank notes to those recorded in a master ledger. The operation certainly provides insight and credibility to the extent Germany was willing to go in order to destabilize world economies, bolstering conspiracy theories around the Lue treasure map.

Introducing gold to the U.S. economy, however, is presented with a different level of challenge altogether than passing forged notes. German efforts included the procurement of treasures and gold from as many sources possible, but a debatable question comes with those motives. While collecting a large amount of wealth in precious metals, would the Germans really elect to seed a foreign economy with it? Perhaps yes, thinking it may be returned into possession if the effort was successful, or in that wealth truly held little weight in the regime's moral. Yet the initiative also detracts from Germany's self-empowering righteousness at the time aimed at eradicating anyone who didn't meet their standardized guidelines. There is, of course, logistics of the matter also. How would they physically introduce fourteen tons of gold into the American economy at the time of war, unseen and America unawares?

Sophisticated spy rings might be an answer to this curious question. The Duquesne spy ring and Operation Pastorius, for example, setup men on U.S. soil for espionage and eventual sabotage. Participants in the spy rings communicated hidden messages in attempt to get crucial inside information back to Germany. Operation Pastorius provides some insight to how twenty-eight thousand pounds of gold possibly landed on American shores, that is, by U-boats. Knowing that German submarines were dropping off spies, it's not unreasonable to consider gold may be delivered in a similar manor. After that, then it became a matter of injecting the economy with it by spending. According to the story of the Lue treasure map, the gold was transported to a single location for later disbursement, but with the collapse of Germany and the end of the second world war, the gold was left behind.

Then, years later, a cryptic map surfaces which is claimed to detail where a secret stash of gold is located on American soil. What must be considered next is the possibility the Lue Treasure map points to a now empty location. In the height of war, knowing that Roosevelt signed the Gold Act years prior, it would be in the best interest of the U.S. government to obtain the treasure before any attempt to harm the economy took place. Given intelligence efforts in America must have been aware of a plot at this level. Double agents working within the spy rings for the US likely obtained information about such an operation if it indeed existed. Thus meaning, chances of finding fourteen tons of gold buried by Germans on American soil in the 1930's are very slim to none if at all. The appearance of the Lue map is so complex, however, that theorists believe government agencies have not deciphered its contents. Which then lends to the idea, of a substantial war treasure existing somewhere in the United States.

There is another possible explanation for the Lue treasure map, one which is opposite from the Germans depositing gold in the U.S. as a means to deflate the economy. The 1934 Gold Reserve Act established that all private gold must be sold to the Treasury. All gold collected during this process was moved to secured facilities around the country. This includes Fort Knox in 1937, after the gold vault was opened. German spies in the U.S. undoubtedly learned of this and perhaps considered these depositories as targets to collapse the economy. After all, instead of introducing gold to hyper-inflate, removing it is much more effective. This brings about an idea that spies learned of bullion depository locations and used ciphers, like the Lue treasure map, to relay the location back to Germany. During the second world war, gold bullion in the depository is reached an astounding twenty-thousand tons before redistribution among other depositories after the war. The realistic impact of fourteen tons of gold added to twenty-thousand is negligible, but incentive to focus on depositories, much more tantalizing.