Men lost along with horses

Treasure lost to the sands of time may not always succumb to the treacherous fate of violent seas as the land itself may finish the job long before an ocean is given tranquil opportunity. For a treasure to sail the tides, it must have originated on land to meet port bound for a bountiful horizon. This is especially the case with buried loot intentionally stashed in the ground for later retrieval. Pirate legends notably mention the idea of buried treasure in locked chests along with cryptic maps where X marks the spot. To uncover such finds means many things bestowed upon the seeker, such as riches, power, and even curses. However, in some cases those treasures kept away from prying gold-fevered fingers may be told they rest in the ground, but is this really the truth?

In the year 1214, bad turned to worse for King John Lackland the first of England. Facing the ill fate of excommunication by his most loyal followers, Pope Innocent the third, and feudal barons. King John was forced to sign Magna Carta in 1215 which limited his ability to rule over the people of England. The Pope supported anyone willing to take the crown which became a great opportunity for King Louis the eighth to complete his occupation of England by seizing the throne. Prince Louis entered England in 1216 and was given homage by King Philip the second of France and the Barons, he was not crowned midst the war. The crown jewels along with a large collection of gold, jewelry, and precious gems accompanied John on a historic campaign of reclamation across England. 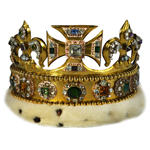 According historical accounts, John traveled to Norfolk and then decided to return after falling victim to dysentery. He elected to send his treasure carts along a treacherous route called The Wash, an area only passable during low tide. Shallow bay areas around the world are known to see rapid inflows and outflows as the tide comes in making it a dangerous place to be. On top of that, The Wash in particular has several deep channels created from rapid tidal outflow. Sudden influx of water across the flats can cause a number of phenomena able to trap men and horses such as whirlpools, strong undertows, and liquefying soil. A common belief suggests Lackland's horse-drawn treasure carts did not move quickly enough to combat a rising tide and it's possible some men may have become trapped in an outflow channel. Studies of the event suggest sediment build-up over the years eventually buried the treasure up to 20 feet below the silt, making it near impossible to recover, a plausible explanation for why the crown still remains lost today.

One curious part of the tale is the claim several of King John's men were lost along with the horses and carts. This means to treasure hunters, if the lost crown jewels were found, it is very likely complete sets of medieval armor, weapons, and other important artifacts lay nearby also waiting to be discovered. It is estimated the current value of the crown jewels alone is around seventy million. Norfolk is known as an area where many rivers meet the sea. To frequent Norfolk for a prolonged period privies one to an intimate knowledge of how those rivers may be used to an advantage. Some believe it might be possible King John's trip was part of a larger, more devious plan to plunder the crown treasures for himself while strategically offing the royal guard. This accusation spawns partially from an event rumored to happen between John and his nephew Arthur.

Speculations suggest the King took his nephew out by boat, killed him, and dumped his body into a river. Many attribute the story of Arthur's demise as symbolic of King John's cruelty and ruthlessness. Arthur would interpret the trip as an opportunity for isolation to privately discuss important matters without realizing those private matters meant his own disposal. The rumor demonstrates John's ability in foresight to execute a diversion, staging waterways to conceal truth and fulfill ulterior motive. From this concept one might ask, how do we know the treasure carts sent across Norfolk bay weren't met with boats at low tide in a secretive master diversion? Or that John instead sent the kingdom's prized possessions on a vessel out of Norfolk beforehand, planning the bay crossing to retain control of the crown jewels? Those who witnessed the event then perished in the wash while the King escaped, essentially absolving him from anyone pressing to have the jewels returned. This assessment creates more of a conspiracy, giving John credit for devising a master plan to flee from excommunication while retaining riches of the throne.