The year is 1714, and an English privateer by the name of Benjamin Hornigold initiated what is to become an immense pirate republic based in the Bahamas. It's believed the principle motivation for Hornigold's actions during this period is a result of religious consequence, from a controversial changing of family houses on the English throne. Benjamin's longstanding loyalty to the crown, a reason he fought proudly as a privateer, tested to a breaking point. The controversy stems from the events after Queen Anne of England died, leaving her Catholic following distraught over the throne's new succession. The Act of Settlement, passed over a decade earlier, now prohibited Catholics from inheriting the crown. Queen Anne's closest living non-Catholic relative is George Louis, a Protestant from Germany. Transition of power in this manor did not bode well for proclaimed Catholic, Hornigold, and his buccaneering career turned quickly from privateer to pirate, reflecting feelings of betrayal by England.

Hornigold's pirate republic started on a small scale by attacking merchant ships using native Indian dugout canoes. Wealth accumulated from pillaging over time and buccaneers looking for their own payback were eager to join his crew. Now with increased resources, and men to fight alongside, Hornigold bolstered the republic in dangerous ways that enabled bands of pirates to hoist black sails together and take on much larger, heavily armed targets. In the year 1717, Hornigold commandeered La Concorde de Nantes, a slave transport frigate previously plundered from the English by the French and added it to his arsenal. At this time Benjamin took command over a lethal warship named Ranger, which he equipped with enough cannon power to capture or destroy almost any ship in its path. With command of the Ranger, Hornigold makes a decision that would forever change the course of pirate lore. Hornigold appointed his second in command, Edward Teach, captain of La Concorde de Nantes.

Edward renamed the French frigate to Queen Anne's Revenge, likely with a personal agenda in mind. The death of Queen Anne resulting in loss of Catholic rule over Britain must have fueled Edward's ambition to avenge this loss, especially under influence of Benjamin's beliefs. Both Hornigold and Teach now captained their own crews as part of the pirate republic's rapid expansion. They split off to increase effectiveness and rally larger crowds of pirates. The captains evidently preferred targeting French ships, though a few accounts do mention minor incursions with Spanish vessels. It is quite possible the Spanish were not a primary focus due to delayed news of Spain's alliance with France reaching the captains in time during the Queen Anne's war.

Teach retrofitted his prized Queen Anne's Revenge with enough salvaged artillery to effectively command plunder missions and sailed into the Caribbean looking for new pirate opportunities. Hornigold also attempted to explore for new missions, but his master plan backfired. He commanded his pirate crews to leave British ships alone as a defense should Britain catch and arrest them for pirating. A poorly thought-out strategy, only employed to protect Benjamin himself, stoked too much animosity between the captain and his crew. Hornigold's pirates revolted, finally tired sitting back, watching wealthy British ships slip by unhindered. Near the end of 1717, Benjamin's crew formed a mutiny to overthrow the captain. 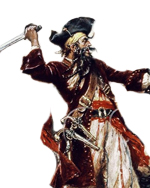 By the time of Hornigold's downfall, Edward Teach assumes his well-known nickname of Blackbeard the Pirate, for his merciless pillaging and plundering of merchant vessels voyaging between Africa and the Caribbean. Blackbeard now resides at the helm of a pirate armada with the combined fire power of more than fifty guns and the frightful audacity of almost two hundred pirates. Estimations by the year 1718, Blackbeard's crew totaled at least three hundred and fifty men strong according to two eye witness accounts, and the number of ships in fleet vary from two to five from similar reports. An integral part of Blackbeard's strategy is to keep sailing at all times, always a step ahead of merchant vessels, and unlike his predecessor, British targets were not off limits.

Theory suggests Blackbeard employed a unique scouting strategy by sending single sloops ahead, or into a predetermined positions, to signal the fleet from a distance. This strategy tricked victims into thinking a much larger fleet is present, such as an armada that employed several scouts for positioning and lookout. Ships who spot the sloops may get the impression of being boxed-in. Daily plundering activity, though quite successful for a few years leveraging innovative techniques, is about to take a sudden downturn at the height of a pirate republic era. Now the Royal Navy and large privateer fleets are closing in, seeking to end to piracy once and for all with promising pardons for those who surrender. A few pirates did surrender, but it is quite understandable why many viewed promises to pardon pirate crimes with skepticism.

For reasons not entirely or fully understood, in 1718 the Queen Anne's Revenge and a flotilla ship called the Adventure ran aground in the Beaufort Inlet shallows off the coast of North Carolina. The incident is controversial as whether or not grounding was an intentional careen, perhaps for the sake of crew members or for Blackbeard himself; a mutually beneficial solution for Teach to abandon his pirates and ditch the Queen Anne's Revenge, to find a ship less-identifiable by the Royal Navy. Blackbeard's pirates removed anything valuable from the wrecks, right down to metal hinges, divvied it up and left the boats behind to face the crushing blue. The flotilla accumulated an undisclosed amount of wealth over the years and this plunder is believed to be aboard at the time of grounding.

Personal loot of Blackbeard, gathered during the time of dugout boat attacks might have been part of the plunder as well. With pirates leaving their ships behind and taking any valuables with, it explains why artifacts of significant value are rarely discovered during dives on the wrecks. The ships were picked clean and now the question, where exactly is the treasure? Treasure hunters researching the whereabouts of Blackbeard's elusive cache stumbled across local legends claiming the notorious pirate frequented caves around the British Virgin Islands and the Black Bay area of St. Lucia since the time of his first act of piracy. The legend continues by noting Blackbeard hid treasure in these caves for later retrieval, a common pirate act of the era. Similarly, the same legend applies to his loot from the Queen Anne's Revenge, suggesting part of this treasure was ditched in caves also to be retrieved later. Without doubt, true a pirate of Blackbeard's ability to devise a plan, retaining plunder should he escape a seemingly inevitable date with English gallows.