As diverse as the world's cultures, so to are treasures from past generations hundreds and thousands of years old. Priceless ornate artworks record cultural heritage in a variety of forms through talents of extremely gifted artisans. Subtle details decorating each piece are clues to archaeologists, demonstrating a period and place craftsman spent long hours to perfect their artwork. Artwork from China for example, features specific elements requested by ruling emperors, allowing researchers to essentially pinpoint the time and place it was created to a very accurate window. This is especially the case as historians race to recover, catalog, and preserve several ships once lost in the treacherous waters around Malaysia. 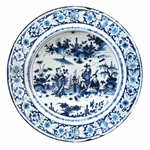 Merchant vessels dating back as far as the fourteen century, that wrecked in the Melaka straights, have been discovered with barge-sized shipments of white and blue porcelain pieces, over thirty ships in all. A few merchants were also transporting a number of ornately decorated urns, metalworking ingots, ivory, timber, and green tea along with small payloads of porcelain. The route, although dangerous in some areas, was a predominant trading hub in the fifteenth and sixteen centuries with both Chinese and Dutch East Indies ships making port on a regular basis. As discovered from wrecked ships here, Sisatchanalai and Sukhothai were both large porcelain production sites. Prior to studying these ships in particular, scholars understood that Sisatchanalai was a major producer, but now Sukhothai's major product role becomes much more clear.

Among treasure discovered throughout Melaka straights wreck sites are rare, well-preserved porcelain dishes, plates, and teapots dating between 1368 to 1644 during the Ming Dynasty. Then there were six consignment pieces with markings of Emperor Xuande dating between 1424 and 1436 from the Ming Dynasty. Another pleasant surprise demonstrates the continuation of trade activity in the area throughout many hundreds of years, with rare Yixing teapots dating between 1821 to 1850 found aboard a ship by name of Desaru. Another ship, by the name of Diana contained over twenty-four thousand precious blue and white China porcelain dishes. Nanyang, a Chinese merchant ship found in the straights carried large urns decorated in Sisatchanalai patterns among a generous selection of ceramic pots, bowls and earthenware. Yet another significant find came from a secret compartment on the Royal Nanhai, with a consignment of five ornate blue and white ceramic bowls, ivory sword handles and the minister's stamp.

Rare, high quality artisan porcelain fetches hefty prices on the collector's market, which has unfortunately triggered mass thieving off wreck sites. Ships posing as fishing trawlers drag nets over the sunken boats in attempt to dredge up some of the treasure. At what price though? This type of operation not only destroys the site from being preserved for future generations to enjoy, but it also literally trashes heritage that may not otherwise be restored. Certain collector items, like a prized chicken cup known for exquisite quality and signature artwork, recently fetched upwards of fifty million at recent auctions due to overwhelming rarity and demand. It is a similar demand driving pillaging of ceramics from many ships in the Melaka straights. Stores have popped up on the Internet offering the chance of expanding private collections with rare pieces, and this type of behavior prevents museums from sharing a country's heritage with the public.