Seventy-one tons aboard the Nicholson

Discovery of any lost wreck containing a generous amount of treasure cargo is sure to capture the attention of both seekers and investors alike. Suggesting the find of an erroneous amount though, in the vicinity of three billion, is first met with skepticism and disbelief. In the case of the S.S. Port Nicholson, a great deal of skepticism has resulted from years of salvage attempts with no real evidence to back grandiose claims such as those of treasure hunter Greg Brooks.

Unfortunately for investors in the salvage operations, not only has an implied treasure not been discovered, but evidence to support Greg's claims is thin at best. It is in Brooks' belief the Nicholson was transporting seventy-one tons of platinum, gold ingots, and diamonds as a lender-lease payment to the United States from the Soviet Union. On contrary to skeptics, there is some merit in Greg's claim, at face value, when looking at the war effort lend-lease arrangements between the United States, Soviet Union, and United Kingdom. The S.S. Port Nicholson was part of the first protocol period whereby supplies were delivered to the Soviet Union by Britain. Some boats utilized in the transport of equipment during the initial lend-lease period war efforts were also used to courier payments on return trip, and remaining payments were granted as interest-free with stipulation to be paid after the war.

This initial period lasted from June to September of 1941, a full year before Nicholson's sinking by a German U-Boat, meaning that in order of the Nicholson to be carrying a lend-lease payment it most likely needed to be an agreed shipment from the original 1941 repayment draft. Lease payments were definitely floating around during this period. Another ship transported payment during the same period, the HMS Edinburgh, and it sunk one month prior to the Nicholson in the Arctic Sea. However, unlike the HMS Edinburgh transporting four and half tons of gold valued at roughly one-hundred and fifteen million, Brooks claims the Nicholson was carrying significantly more, which many investors now believe to be unlikely for a few reasons. First there is a number of salvage attempts put forth by Brooks without even one recovery or reasonable scrap of proof.

Then we have a salvage crew member stepping forward to describe expedition plans that involve fixing a diver to plant a gold bar for later retrieval with the submersible. It might be understandable given unforeseen difficulties and conditions associated with deep sea salvaging, to require multiple dives before success, but the Brooks operations lasted well beyond investor tolerance. Over time the operation mysteriously changed from a that of a treasure hunt to a routine salvage operation, and this coupled with failure to produce tangible documentation linked to the wreck. These two issues along with the lack in salvage brought about intense scrutiny over the expeditions and backers began to question their investments. 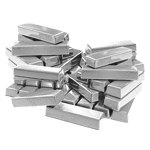 When examining other circumstantial factors it becomes evident the amount of treasure, if any, aboard the Nicholson is far much less than initially claimed. It is documented the ship was transporting fifty-six hundred tons of car parts and military equipment, which means it could quite easily haul seventy odd tons of platinum plus other metals, so there is plausibility in that aspect. The fact HMS Edinburgh also transported a lend-lease payment during the same period suggests wealth of prominent value found its way to exchange during the war effort. However, it is the type of cargo and amount claimed that becomes concerning when examining global production of platinum at the time.

United States records indicate one and half tons of foreign platinum were imported in 1940, and a further three and half tons in 1941, according to the precious metals production report. If Nicholson made port in New York with the suggested cargo, another seventy tons would've been added as procured by land-lease, jumping by twenty times from the previous year. Not only is this amount a bit high compared to foreign import and domestic production, but also at the time, the Soviet Union entered a commercial agreement with Germany for production materials. In this agreement Soviet Union agreed to supply various metals, rubber, grains, and two and a half tons of platinum on the material manifest. They shipped the platinum as fifteen-hundred pounds in 1940, then in 1941, another thirteen-hundred pounds; this, for exchange of machinery, armaments, and large tooling.

As the number two producer of platinum in the world, the Soviet Union shipped away at least half of each pound processed in those years, spent in the German deal. With this commercial agreement, Soviet Union would then be paying the United States lend-lease, in one lump sum, with over ten years of store. Considering the production of platinum in the Soviet Union did not escalate until pressure from Germany, it seems unlikely but not entirely impossible. According to few sources, the Soviet Union may have depleted all of its domestic resources in exchange for machinery from Germany and the United States. Having those resources stretched between two countries, though, makes it that much more difficult for the Soviet Union to fulfilled on their end of the bargain. Even further, for war's duration, the United States supplied eleven billion in deliveries and expected lend-lease payments to account for this.

In 1947, the Soviet Union faced two and half billion after-war repayment, which was then cut in half in 1948, then to eight-hundred million a few years later. Currently, this lend-lease is still outstanding, now reduced to less than seven-hundred million due by the year 2030, proving Russia's reluctance or inability to pay on the debt. This makes it difficult to believe any payments were shipped during the war from Soviet Union to the United States. Suppose though, if the S.S. Port Nicholson is did transport a payment on its return trip. The United States supplied one-hundred million worth of aid in 1941, and seventy tons of platinum was worth three-hundred and eight million at the time; Now worth three point one billion on today's market. Is it likely the Soviet Union sent a payment for almost four times the amount of supplies received?