The Fall of Moctezuma

The year is 1504 and a young Hernan Cortes steps foot in the Spanish Santo Domingo colony where he was to became a notary of Azua de Compostela. In this position he contributed to the conquest of Hispaniola, and then onward to conquest Cuba by directive of the crown. With new territory secured, Cortes was placed into a role as clerk of the treasurer and eventually became mayor of the capital of Cuba. By 1518, Hernan found a promising opportunity to explore Mexico's mainland, but the proposed command charter was revoked by the governor of Cuba, Diego Velázquez de Cuéllar.

Appalled by the governor's decision, Cortes defiantly ignored orders, gathered a small army and made way to the Yucatan Peninsula. In 1519, after repeated attempts to meet with the ruler of the Aztec Empire, Moctezuma, Cortes proceeded to march on Tenochtitlán to confront him. Along the way he gathered allies from the Tlaxcalteca and burned the city of Cholua as an intimidation tactic. The Aztecs however, instead welcomed the Spanish army peacefully into Tenochtitlán believing they were emissaries of Quetzalcoatl.

Gifts of gold, silver, and jewels were given to the Spanish, but unfortunately for the Aztecs, conquistadors interpreted this to be a more lucrative expedition than previously imagined. This must have been a dream come true for Cortes; traveling all the way to Tenochtitlán after no word from Moctezuma, thinking battle would be imminent, only to find the Aztecs presenting him with wealth. Perhaps Cortes believed it as too good to be true. 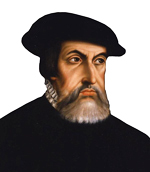 As conquistador, interests of Spain heavily influenced decisions, and Cortes began devising plans to conquer the Aztec city of Tenochtitlán knowing ultimately the scenario would likely not work out peacefully to Spanish benefit. During the same time, some Aztecs were not happy with Spanish presence in the city. Civil unrest spread throughout and by 1520 the situation escalated to the point Moctezuma was killed. Rebellion broke out, pitting Aztecs against Aztec rebels and the Spanish. Amidst chaos, Cortes plundered as much as possible and fled back to Tlaxcala. It is commonly believed a majority of the Aztec treasure was lost during this escape due to several causeways connecting the fortification of Tenochtitlán to the mainland. Where this treasure truly ended up is indeed a mystery. Six months after Cortes escaped, an all-out siege on Tenochtitlán begun.

A crippled Aztec empire now faced a Spanish army bolstered by allies and men from Cuba. Any treasure brought back from the previous escape surely aided motivation for the attack by corroborating details of the event, coupled with loss of soldiers during the rebellion outbreak. Siege of Tenochtitlán lead to its downfall and from then on became known as Mexico City in honor of Cortes Yet, the Spanish were unable to recover the gold, silver, and gems. Covering the city from wall to wall, they searched relentlessly, and only fragments of treasure were found, but perhaps this was the reality. After all, nobody from Spanish conquests openly reported seeing where the remaining wealth was hidden, or for that matter, any cache at all. Hence a tiring search combing the city, as gifts from the initial visit implied much more existed.

However, even though the Spanish did not originally locate a treasure cache during the first visit, or find it after Tenochtitlán's siege, a fair amount of gold, silver, and gems were seized from other locations. It seems likely the huge Aztec city would boast equally or beyond, especially as evident from those offerings the Spanish did receive. Thus, treasure hunters first scoured for known treasure, the plundered riches lost along causeways, unfortunately without much luck. Draining of Lake Texcoco, a body of water surrounding Tenochtitlán started around 1630 after excess flooding continued to plague the city, and even then the infamous treasure could not be located. Theories suggest the Aztecs recovered the wealth lost in the causeways before the Spanish returned, added it back to their cache, then fled the city in exodus with the valuables. From this point, the hunt turns to many dead ends. Then, a chance discovery in 1992 might explain why.

Off the coast of Florida a shipwreck is found, identified as one of Cortes commission, with an approximate value of five hundred million in treasure. Chests of emeralds, jewelry, ceremonial jade artifacts, Aztec and Mayan relics, and crystal skulls believed to be artifacts from none other than, Moctezuma's rule. An unbelievable 964 carat gem, known as the emerald of judgment, alone estimated at sixty one million was part of the discovery. Precious jewelry on the wreck dates from the sixteenth to eighteenth centuries, suggesting it was the lost Tenochtitlán treasure. The cache's composition may also be an accumulation from numerous conquests on the Aztecs and Mayans.

According to one account, no hidden or lost treasure in Mexico City could be found after years of tireless searching. Explorers were consistently unable to relocate any gold ditched in causeways, or anywhere in the city area as claimed in legends. Aztec relics discovered aboard the shipwreck may have contained a few pieces Cortes slipped away with during the rebel outbreak, though a substantial amount appears to be from other sources. However, we understand Tenochtitlán as the equivalent of a modern day metropolis, and an ancient city likely to house an accumulation of treasure from multiple sources. If the shipwreck from Cortes commission transported a different cache entirely, and treasure hunters haven't been able to locate gold in the area, then where did it eventually end up?