Glimmer of dark metal in the sand

Though several Spanish ships assumed the name of St. Peter throughout the course of history, this particular San Pedro is famously known in underwater archaeology as one of the first major treasure recoveries from modern times. Among the treasure found on the San Pedro is a single, delicate, and mesmerizing piece made of gold and emeralds that would forever change marine archeology along with the world's perception of underwater treasure hunting. Sifting through historical records to find the origin of Tucker's prize discovery ship proves difficult. At the time of operation, San Pedro was a fairly common name to be associated with a seafaring vessel. However, the records narrow possibility to three predominant ships adorned by the name St. Peter sailing at the time of, and near the area of the ship Tucker found.

When examining the routine sixteenth century Portuguese and Spanish fleet operations, four Atlantic-bound routes tend to stick out as the most feasible explanations. The routes outline return trips toward either Azores, Lisbon, or Seville, from either Veracruz, Havana, Portobelo, or Cartagena. These are documented trading ports linking the Caribbean seas to Spain by proximity of Bermuda. Stops at Cartagena or Portobelo may have also included layover port in Havana on the return, depending on the nature of the mission. From this information, two ships from the narrowed list may be eliminated as unlikely due to both time and location. First is the San Pedro captained on a course in the complete opposite direction, by famed explorer Sebastian Rodriguez Cermeño. Sebastian followed a trade route in the same year from Acapulco, Mexico to Manila, Philippines across the Pacific.

The second ship crossed off is openly, and mistakenly, attributed as Tucker's discovery ship, San Pedro captained by Hieronimo de Porras. Interestingly, the Porras St. Pedro did follow a similar route along the coast of Bermuda, but at a different time. Porras is officially recorded as leaving the year after Tucker's prized wreck is first reported missing. With two ships eliminated by time and place, the third known possibility is a curious vessel most likely to be the identity of Tucker's mystery ship. This San Pedro sailed from Spain in 1594, the same year as Bermudian historians officially date the wreck, and it followed an exact return trade route passing through Bermuda's coastal waters.

Record indicates the third San Pedro was captained by Pedro Nunez de Bohorquez who sailed under protection of an armada en-route to Portobelo from Spain. The armada's plan intended to have Nunez split off toward Rio de la Hacha, or Cartagena, to load up and continue on its journey back to Spain. After raising anchor in Cartagena, the Nunez San Pedro then followed the return trade route heading north ahead of its armada, hooking around Havana, then out across the Atlantic toward Azores while carrying respectable amounts of treasure in the hold.

Historians determined the ship met its fate in a dangerous section of the Bermuda coral reefs known as the Isles of Devils. Almost a hundred years prior to San Pedro's sinking, this area was often visited as a rest stop along the way to Caribbean trading ports, but a combination of bad weather and eerie animal noises at night turned the archipelago into a freaky legend, with warning to avoid at all costs. Although the ship likely sailed in the vicinity of Isles of Devils, exactly how San Pedro sunk remains a mystery to researchers. However the tragic event took place, one thing is for sure, the wreck spent a few hundred years peacefully on the ocean floor, lost and forgotten until a chance discovery in 1955 by Teddy Tucker. 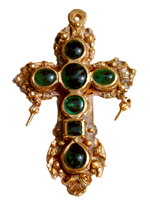 On a routine salvaging mission to recover lost commercial fishing equipment, Tucker happened upon San Pedro's artifacts accidentally. While searching the ocean floor for a large fishing net, he noticed the faint glimmer of dark metal in the sand. Upon a closer inspection, the metal turned out to be multiple bronze cannons, and a few were recovered at the time with scrap dollars in mind. Tucker marked the site to find it easily again then proceeded to find a buyer. The Bermuda Monuments Trust Commission presented a considerable payment well above any offerings from salvage yards before Tucker had a chance to scrap the cannons. Of course this success immediately prompted Tucker to return to the site.

The return visit in 1959 would ignite Tucker's career as a full-time underwater explorer, and at the same time, rock the foundation of modern treasure hunting. On this dive, Tucker uncovered an immaculate gold cross encrusted with seven stunning emeralds, the same cross later featured in Bermuda's 1969 commemorative collection. The initial cannon discovery ultimately lead to a highly successful and lucrative salvage operation, and the beautiful ornate cross became an object of affection. Treasure hunters and collectors from around the world are drawn to its craftsmanship and value. Admirably, historical importance of this discovery was understood by Teddy, and he donated the cross to Bermuda's Aquarium Museum for it to be treasured by thousands for years to come.

Tucker's donation catches public attention. Value of the cross quickly escalates and antiquities collectors around the world suddenly become much more interested in the cross. Perhaps some collectors were even willing to go as far as necessary, to procure the piece for their own. Then, a sophisticated and well-executed heist reminiscent of capers shaking the art world during the period, replaces the Tucker cross with a nearly exact replica despite protection efforts of Bermudian authorities. Government officials are lead to believe the swap must have been an inside job, and years of investigation failed to locate any solid evidence. Over fifty years after the incident, the whereabouts of the authentic treasure's location, and who was responsible for its disappearance, still remains a mystery.

As intricately stunning and beautiful as the cross is, this isn't the only of its kind to be found on sunken treasure ships. For example, another renown undersea explorer by the name of Mel Fisher recovered a memorizing twenty-two carat emerald cross from the 1622 wreck of the Nuestra Senora de Atocha, strikingly similar in design as the Tucker cross. The Atocha, like San Pedro, followed a trading route ultimately destined for Spain after visiting the Cartagena region of the Caribbean. Similar cross designs other than Fisher and Tucker's, vary in overall size with five to seven beautifully square and round-cut style emeralds set into finely sculpted gold cross pendants, finished with elaborate decorative detailing. On a few sunken treasure recovery operations, similar styled jewelry is discovered within the captain's quarters, including a gem-studded cross with a thick full necklace chain stashed away in an exquisitely carved ornate gold keepsake box. Given the design complexity, level of detail and location found, these decorated crosses seem to present their own royal sense of mystery capable of captivating anyone who lays eyes upon them.